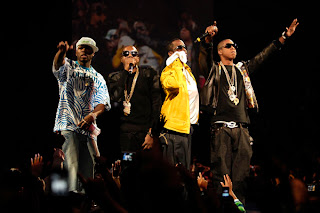 Question of the day... to rock shades @ a show/party/club/event, or not to rock shades... what do u think? People seem to feel differently about this "wearing sun-glasses-indoors" phenomenom, and I wanna get ur input.
Is it okay to rock shades indoors at a party/event, or are u someone who thinks that it shouldn't happen under any circumstance... as in... u see someone with shades on and u automatically wanna say hey buddy "there's no sun in here"...
I'm curious to know what people think. From an artist's perspective, I learnt really early on that it's almost necessary. Mainly becuz when ur appearing at an event, especially one where u perform at, after sweating it out on stage and having a couple cocktails, u can easily look reeeeally CRAAAZY. And in today's internet age, when everybody takes a picture and tags u on facebook, u can start spoling ur fine-boy-fine-girl-no-pimples status. And that's not kool holmes.
But some people feel like it's such a fronting move, and that it should never happen indoors period. Other people feel like it's okay - cuz it's all about fashion and whatever works for u, or whatever statement u make with ur style. Like my boy Tino, U can probably count the number of times u'll find him without shades, on one hand, and still have a couple fingers left over. Me, personally, I go either way. Sometimes I rock 'em, sometimes I don't. Depends on what my mojo is feeling like.
Sooo what y'all think? Are the rules different for artists/performers? Is it okay in some circumstances? Are some glasses more okay than others? What about the clear shades that are made for fashion, not sunlight? Or do u see someone with shades on and automatically roll ur eyes?
That's the question of the day, folks. Now hit me with answers and thoughts.
~ B.W.
Posted by Banky W at 8:15 AM

Sorry, this is kind of late in reply but I just discovered your blog, didn't know you had one. Thanks Bella Naija for the heads-up. You know, I always wearing stunners in door was such an attempt at frontin' but until you talked about it from the performer's perspective, I didn't realise they had a practical value as well. I just thought it was to front a look and it came off as insincere and too showy, know what I mean. But with that tidbit you offered, I'd say, more power to the artists that wear that. Although, the artists should consider that wearing stunners indoors doesn't make anyone approachable but then again, that might be what they want to accomplish. Lol!

Love your music, keep doing your thing and representing Naija to fullest.

Rock 'em of course! I believe naijas must have started this trend of wearing sunglasses at night, especially those iya's at the owambe all night parties. You know they've got to look good on those videos

they're a cop-out!! if you're a fine boy with no pimples, a little sweat shouldn't hurt now, should it?

i generally am against dark shades indoors, however if ure a celeb it's pardonable.
actually no, not really, but people tend to ignore em then :P

ps: ur blog has absolutely zilch publicity. is that intentional?

I see the shaded and want to help them yank it off and stuff it in a safe somewhere.

I just saw a photo of a guy saying his wedding vows at the church and wearing one of those fat-armed sun glasses. How rude!

Whoever started this rubbish should be sanctioned.

Nice blog! You should update some...