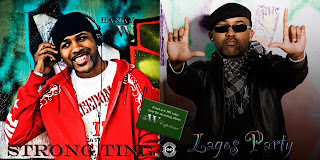 If you were lucky enough to have been in Lagos and tuned your radio in
to 93.7 fm yesterday afternoon, you would have caught the radio
premiere of the first two singles from Banky's "The W Experience"
album. It's official "Strong Ting" and "Lagos Party" have made their
debut and everyone's loving it.

The reviews thus far have been off the charts. Trust us the songs will
be coming to a radio station or ipod near you real soon, however if
you can't wait, you can hear both songs online now @
http://www.notjustok.com/2009/04/26/banky-w-lagos-party-strong-ting-official-leak/

Or go to underdarock.com, or TruSpot.com and search for Banky W's
profile to listen in. I can tell u that we here at EME are feeling
really excited about the feedback thus far... 'Gun says we're right
where we need to be. Hopefully y'all will feel like it was worth the
wait.

Plans for the videos are in full swing and Banky W will be shooting
"Strong Ting" any day now, no worries we'll keep the fans family in
the loop on everything going down.

For now please check out the new material online and give us some
feedback and support! Also please take 5 mins of ur day to vote for
Banky W on the following links:

Nigerian Entertainment Awards -
http://www.nigeriaentawards.com/#awp::nominees/ - Scroll down to where
it says Vote Now! at the bottom of the page and vote for "Banky W" as
the Best International Artiste